Kathy: Harold and I first heard about NFP on our Engaged Encounter weekend but at that time, we were not given any additional information about classes or where to go to get more information.  Harold has always been health conscious and especially liked the fact that it was natural and that I wouldn't have to take hormones.  Harold is one of those guys who exercises regularly, eats healthy foods, and doesn't like to take medicine unless he's really sick, so the idea of a natural method was appealing. We also both have science backgrounds and were impressed with the logic behind the method and how effective it was.  But as I said, we had no idea where to go for more information.

Harold: Not long after our weekend, I was on a business trip in San Francisco and in the glove compartment of the rental car, there was a brochure for NFP from CCL.   I read the information and felt like my prayers were answered.  Unfortunately, we were not able to get to classes until after we were married and moved to Colorado.

Kathy:Just before our wedding, I went to the gynecologist and told him that we wanted to practice NFP but would not be able to take the classes until after the wedding.  He said, “You know what they say, some got rhythm and some don't”.  He recommended that I take the birth control pill.  In my naivety, I took his advice.  In the few months that I was on the pill, I realized that our sexual relationship was not what I had envisioned before our wedding.  For a while, we tried to live up to what we thought every young newlywed couple did – have sex every night.  But it was not long before I was feeling overwhelmed.  We started our NFP classes a couple of months after we were married and it totally changed our sexual relationship.  Now we had to abstain for a time and show our love in ways other than sexual. During the times when we had to abstain, Harold still took me out on dates or helped me with dinner or the dishes.  Those times were so important for me because I realized how much Harold really loved me. After we practiced NFP for about a year, we knew we wanted to share it with others.  There were no teaching couples in Alabama and we felt called to be a part of this ministry.

Harold: As Kathy mentioned, NFP totally changed our sexual relationship.  It also helped us grow together in our overall relationship.  We would spend our abstinence time just talking or giving each other back rubs.  We actually found it easier to talk about our sexual needs or desires during the fertile time.  We didn't feel any pressure to try out any of the things that we had talked about.   We also felt that our spiritual lives improved and we believe it is partially due to the fact that we are living in accord with God's plan for married couples.  I can truly say that Kathy is my best friend and that we connect not just physically but on a deeper, more spiritual way.    Abstinence was a struggle at times but over the years, we've used the abstinence time to grow closer together.

Kathy: Practicing NFP has had many positive effects on our family. We've had great experiences planning and having our children. Teaching them about their own sexuality came quite naturally. It was also much easier to explain to a teenager why they should refrain from sex until they were married when we could share with them the self control we had to use as well.

One of the things I like about NFP is that it is a shared responsibility.  Because we both participated in the charting, Harold knew exactly where I was in the cycle. I didn't have to tell him when I was fertile or when we could resume relations.

Harold:This is how we handled the actual practice of NFP.  I was responsible for some of the data collection and the charting of all of the data.  In the morning, I gave the thermometer to Kathy and made sure she put it in the right way.  Kathy is not a morning person and if I left her to take her temperature, it probably wouldn't get done consistently.  After it beeped, I logged the temperature.  Before bedtime, I would ask Kathy for her mucus and cervix observations.  When it came to deciding when to resume relations, we both made the decision. I also kept the thermometer clean and ready to go.  On a personal note, I knew that we decided together that we were going to practice this method and I wanted to be an active part of its “way of life”.  I wanted to show her that I loved her even when we were abstaining during the fertile time.  I knew that there are many other ways to show her that I love her other than through our lovemaking.

Kathy: Now that we are past my fertile years, we don't have to chart any more. I look back on our fertile years with fond memories and no regrets. The sacrifices we made were small in comparison to the benefits we received through the practice of NFP.  We feel called to share the values of NFP with others. 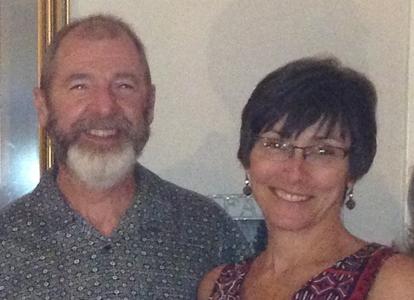